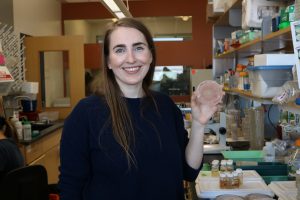 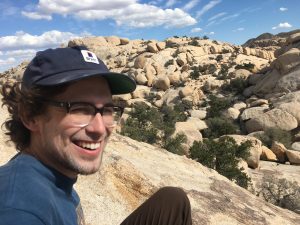 Two students, Michael Kartje and Kirsten Gotting, were awarded the Schlimgen Award prior to the November 18 Colloquium seminar.  Mikey and Kirsten identified the role early geneticists have played in the oppression of marginalized communities.  In response to that understanding and to create a more anti-racist program of study, they created a group that examines this history, considers its impact, and explores parallels in contemporary society and science while actively problem-solving to create positive change.

Through their efforts, they have coordinated a bi-weekly, group discussion with multiple guest facilitators and are working with program administration to increase visual representation of underrepresented scientists while also insisting the program acknowledge the impact that it has had on marginalized and vulnerable peoples.

The Schlimgen Award is given in recognition of the achievements of students who have performed well in the program or have provided an exceptional service to the program.  The award is named in remembrance of Katie Schlimgen who received her PhD in the early 90s.  She was described as innovative with a fierce determination to be great, and who expected excellence out of herself and the lab that she worked with.  Katie was a role model for those around her.  It is with those qualities in mind that the program is proud to recognize the achievements of Mikey and Kirsten