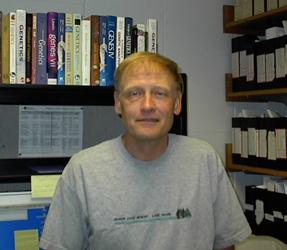 Research Description:
I am interested in mechanisms of post-transcriptional regulation of gene expression. We discovered and continue to study an mRNA decay pathway in yeast known as nonsense mediated mRNA decay (NMD). This pathway requires nuclear and cytoplasmic components. NMD monitors errors in gene expression that lead to premature termination of translation (RNA surveillance). NMD also regulates expression of a subset of several hundred yeast genes many of which are important for the structure and transmission of chromosomes and for cell surface components involved in sensing the extracellular environment. I am also interested in the nuclear RNA/DNA helicase Sen1p, which functions in transcription, DNA repair, and RNA processing. SEN1 is the ortholog of human SETX, which has been implicated in two clinically distinct neurological disorders.