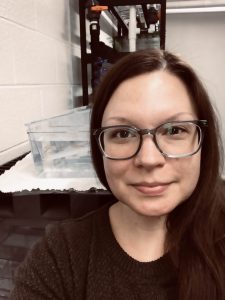 Research Description:
Cargo-specific retrograde axonal transport Neurons rely on the efficient and highly regulated transport of cargos between the cell body and axon terminal to form and maintain neural circuits. These large cells can have axonal projections that reach approximately a meter from the cell body in humans, if not longer. To carry necessary proteins and organelles throughout this enormous volume, these cells rely heavily on their intracellular transport machinery. Disruptions to cargo transport are thought to underlie many neurodegenerative diseases; however, we still have little understanding of how this process is controlled in the complex, intracellular environment of the neuron. Using forward genetics, we have identified several zebrafish strains with phenotypes indicative of disrupted transport of cargo from the distal axon to the cell body. To date, all mutants we have identified using this approach are the result of nonsense mutations in proteins known to interact with the retrograde motor, cytoplasmic dynein. Two of these lines have been the subject of projects delineating a role for the disrupted proteins in the retrograde movement of lysosomes and an activated kinase in one case and mitochondria in the other. In addition to these mutants, we have also isolated 6 as of yet uncharacterized mutant lines which will form the basis of independent research projects in the lab.

In addition, we also use reverse genetic approaches to identify novel genes important for the retrograde transport of various cargos in the lab. The end goal for this section of our research program is to define the mechanisms of cargo-specific retrograde transport for axonal cargos. This will allow us to both understand the basic biology and better delineate the pathology associated with neurodegenerative disease.

In order to form and maintain neural connections, neurons extend long axonal processes to make contact with partners both in close proximity and at great distances. Supporting this type of large, metabolically active structure requires a great deal of energy supplied largely by mitochondria. Therefore, the proper localization of mitochondria in axons is thought to be critical for both the formation and maintenance of axons. In addition, in order for information to be transmitted via action potential in axons, neurons need to be rapidly depolarized and subsequently hyper polarized to ready themselves for the next burst of activity. Largely this re-polarization of the neuron is accomplished by ATP-dependent pumps. As mitochondria are the primary source for ATP locally, the function of the neuron relies on the positioning of this organelle near sites of high ion flux to return the neuron to a resting state.

Our lab uses zebrafish larvae and IPSC-derived sensory neurons to address these questions using complimentary approaches including in vivo imaging, genetics, and protein biochemistry in vivo.