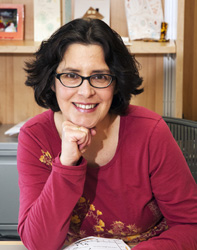 Research Description:
We pursue studies of eukaryotic chromosomes and associated regulatory proteins in budding yeast Saccharomyces cerevisiae as a model organism. We are interested in mechanisms that regulate chromosome replication, genome stability and gene expression in eukaryotic cells, as well as the mechanisms by which cells coordinate and integrate these processes in order to grow and divide normally. These are fundamental biological questions relevant to both human disease, particularly cancer, and development.

Eukaryotic chromosomes, in contrast to E.coli, rely on multiple origins for DNA replication, even the small chromosomes of yeast. Each yeast chromosome (there are 16 nuclear chromosomes) is smaller than the E.coli genome that uses only a single replication origin for its complete duplication, yet each contains between 10-20 active replication origins!! Why do eukaryotic genomes contain so many replication origins? Why do origins show so much variation in terms of efficiency of initiation or time of initiation during S-phase? What are the mechanistic causes of this variation? What kind of evolutionary pressure/selection mechanisms act on individual origins? This is an interesting question since it appears eukaryotic cells have many more origins necessary for efficient cell division. How does the efficiency of origin use influence genome stability? These are some of the questions we are addressing on this subject.

Cell cycle regulators and chromatin/chromosome architecture and dynamics: Eukaryotic chromosomes are packaged into chromatin, and specific chromatin structures (i.e. the particular combination of post-translational modifications on histones and non-histone chromosome binding proteins) vary considerably over the length of even a single chromosome. In addition, the chromosome adapts a specific 3-dimensional architecture in the nucleus with respect to other chromosomes and the nuclear membrane. This architecture can influence chromatin structure and the functions of chromosomes, but it is unclear how. In addition, chromosomal architecture is dynamic (and must be!) to accommodate the changes chromosomes must undergo during the cell cycle. We have several different projects that are focused on cell cycle and chromatin regulators conserved from yeast to humans. We are pursuing the function of these regulators using a variety of experimental approaches.

We take a multidisciplinary approach to these complex, fundamental questions of chromosome biology that includes: classical and molecular genetics, genomics, bioinformatics/computational biology, biochemistry and cell biology.