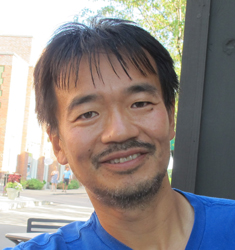 Our research program is aimed at understanding the molecular mechanisms causing age-dependent abnormalities and its association with age-related diseases. Our studies have shown that mouse models showing accelerated aging phenotypes provide powerful tools to investigate these mechanisms. The experimental system for most of our studies is the mouse eye, which offers a number of advantages: The eye is not a vital organ so mutations affecting the processes of interest can be identified and studied throughout the entire span of development. The well-organized structure and easy accessibility of the eye facilitate experimental analyses. At the same time, because the cells present in the eye (e. g. epithelial cells, neurons, inflammatory cells) are representative of cell types present in other organs, information gained from studies on the eye can reveal cellular mechanisms of general significance. In general, our studies utilize a forward genetic approach, beginning with mouse mutants that manifest phenotypes of interest (accelerated aging). A major advantage of this phenotype-driven approach is that it offers the potential of identifying previously unknown genes and molecular pathways that regulate a process of interest. After a gene/protein of interest has been identified, we aim to unravel the pathway by which it normally acts whose disruption results in the observed phenotype. One major approach we use in dissecting these pathways is to identify genetic modifiers that interact with the original mutation indicating that they are likely to be affecting other components in the same pathway. In this way, we can expand beyond the original mutation to obtain additional entry points into the same pathway and allow a more complete understanding of the molecular pathways that underlie the phenotypes under investigation.

Over the past years, we have used these approaches to identify and characterize several genes of interest and to begin to elucidate the pathways through which they operate. Our immediate future goals are to obtain a more detailed understanding of these pathways to advance our understanding of the mechanisms that regulate aging and underlie age-related diseases.