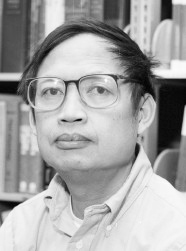 Our laboratory studies microbial sensory transductions with emphasis on ion channels. We have pioneered the use of patch clamp on Paramecium, yeast, and E. coli, and continued to examine microbial channel genes and proteins. Current research is on the molecular biology and biophysics of eukaryotic mechanosensitive ion channels.

E. coli MscL: The mechanosensitive channel of large conductance was first detected when we patch-clamped giant E. coli spheroplasts. We then cloned and dissected MscL while the Rees lab solved its crystal structure. MscL is now widely used as a tangible molecular model for mechanosensations.

Forces from Lipids: A key finding on MscL is that such channel proteins receive forces from the lipid bilayer. Thinning and deforming the bilayer alter the distribution of the large intrinsic surface tension causing channel opening. This concept is being extended to eukaryotic channels. See Kung (2005) and Kung et al, (2010) for reviews.

Prokaryotic K+ channels: The crystal structures of prokaryotic K+ channels by Mackinnon and others deepen our understanding on ion filtration and channel gating. However, what these channels do for any of these propkaryotes is entirely unknown! To find out, we have recently surveyed the K+-channel genes in 270 prokaryotic genomes and are isolating and studying mutants of Kch, the K+ channel of E. coli.

Yeast K+ channel: Our patch-clamp survey of the budding yeast has revealed a mechanosensitive channel and a K+ channel in the plasma membrane. Four groups cloned and showed that the K+ channel has an S1-S2-S3-S4-S5 -P1-S6-S7 -P2-S8 topology. Its outward rectification is not by an external Mg2+ block but by the collapse or restoration of the K+ filter, depending on the direction of the K+ motive force.

TRPY1: The yeast vacuolar membrane has a cation channel that belongs to the TRP superfamily of sensory channels. It is mechanosensitive under patch clamp and can be activated by osmotic upshock in vivo. Gain-of-function mutants with exaggerated responses have been isolated and mapped.

Rat TRPV4: We have functionally expressed rat TRPV1 and TRPV4 in yeast. One model in the literature describes osmotic swelling to activate enzyme(s) generating ligands to open TRPV4. Yeast has no such enzymes or ligands. We have now expressed rat TRPV4 in Xenopus oocyte and, by patch-clamp examination, showed that it directly responds to membrane stretch force. TRPV4 mutations have recently been found to cause human disease in bone development and peripheral neuropathy. We found one disease allele to have spontaneous activity but have little change in mechanosensitivity.

Paramecium: Ion channels govern its ciliary motion and therefore its swimming behavior as in animals. We have isolated behavioral mutants and some of the corresponding genes. The genome of this unicell has recently been completely sequenced. It contains 298 K+-channel genes! (Only 91 in human, 1 in budding yeast, 1 in E. coli).

A class of over-excitable mutants in Paramecium have mutations at the C-lobe of calmodulin (CaM), while a class of under-excitable mutants at the N-lobe. We showed by patch clamp that CaM is a detachable subunit of a Ca2+-activated channel. That CaM is often an ion-channel subunit and has a functional bipartition have now been widely observed among animal ion channels.

Genetics: We invented a method to clone genes based on Paramecium phenotypes. More generally, we developed ways to find mutants that harbor “loose-cannon” channels. In this extension of forward genetics, the “loose-cannon” (“gain-of-function”) mutations pinpoint crucial parts in channel proteins without preconceived bias.