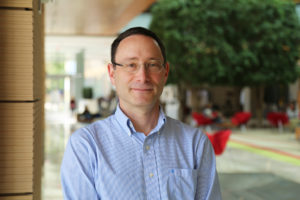 Research Description:
Research in the Newmark laboratory utilizes the tools of molecular cell biology and functional genomics to address several major biological problems for which planarians serve as excellent models.

Differentiation of the Regenerative Stem Cells: Roles in Regeneration and Tissue Maintenance
Planarians can regenerate a complete animal from a tiny fragment of tissue; this amazing regenerative ability is based upon a population of somatic stem cells maintained in the adult. How are these stem cells specified to adopt specific fates? How is their differentiation choreographed to correctly replace the missing structures? How are newly differentiated cells integrated into functional tissues and organs, during regenerative and homeostatic processes? How are stem cell proliferation and differentiation regulated systemically? We address these and related questions using the planarian, Schmidtea mediterranea, as a model, combining high-throughput in situ hybridization screens to identify cell type-specific markers, with transcriptomic analyses and functional studies using double-stranded RNA-mediated genetic interference (RNAi).

Regulation of Germ Cell Development and Differentiation
We are also interested in understanding the mechanisms by which germ cells are specified, and how physiological/environmental signals regulate their proper differentiation. In contrast to the commonly studied genetic model invertebrates, in which localized determinants specify germ cells in the early embryo, planarians use inductive signals to form their germ cells from the somatic stem cells much later in development. Thus, the functional genomic resources available for studying planarians can be used to examine inductive germ cell specification and the factors required to convert a somatic stem cell into a germ cell. We are currently using unbiased, genome-wide approaches to identify both intrinsic and extrinsic factors required for proper germ cell development.

Rozario, T. and P. A. Newmark. 2015. A confocal microscopy-based atlas of tissue architecture in the tapeworm, Hymenolepis diminuta. Experimental Parasitology 158: 31-41.