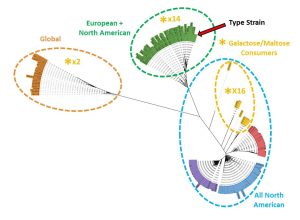 Professor Chris Hittinger and his lab has been awarded a Hatch Grant for their work on genomic investigation of agricultural traits in a versatile wild yeast on the edge of domestication. Torulaspora delbrueckii is a ubiquitous yeast with global distribution that is frequently isolated from both environmental substrates, such as soil and bark, and anthropic substrates associated with the fermentation of agricultural products. Its association with industry is not incidental; T. delbrueckii is the most well-studied and widely used non-Saccharomyces yeast in the winemaking industry, where it is increasingly favored for its improvement of several wine quality and sensory parameters. It has also attracted interest from the baking, dairy and beer brewing industries, but despite its potential, there was limited information about the agriculturally relevant traits of the yeast. 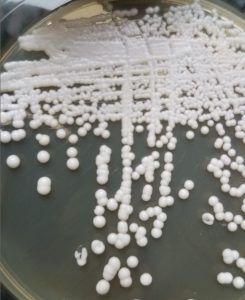 The Hittinger lab has been working to isolate and categorize different strains of T. delbrueckii to improve our general understanding of intraspecies genomic diversity in yeasts and offer insights into microbial dispersal and domestication. They have already isolated 266 wild strains of T. delbrueckii, providing a collection of unprecedented scale for this important species. Strains came mainly from broad national surveys of yeast biodiversity conducted by undergraduate researchers of the Yeast Exploration and Analysis Science Team (Wild YEAST Program), as well as a 3-year longitudinal investigation of the UW Lakeshore Nature Preserve. All 266 strains were then had their full genomes sequenced and compared to 67 other strains originating from European and partially domesticated sources. Preliminary results show that yeasts obtained from from anthropic sources are strongly associated with the ability to consume maltose and galactose while the wild strains consume solely glucose, showing early signs of acclimatization to human environments.