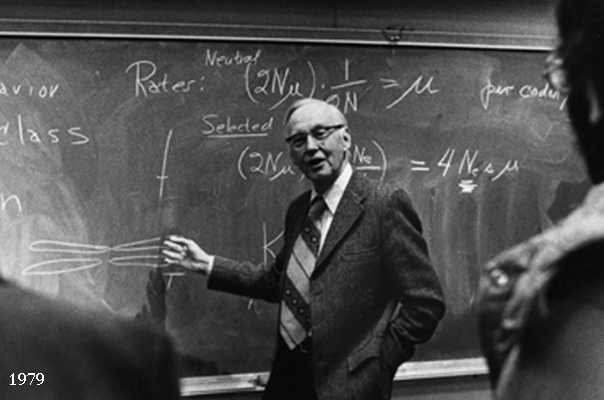 The Laboratory of Genetics is continuing to honor Professor Jim Crow for what would have been his 100th birthday. A birthday celebration took place in Fall 2016 in the form of a symposium and dinner.  The department is focused on reaching a $1 million goal to have a professorship in Professor Crow’s honor.

Professor Jim Crow was a pioneer in the field of genetics. He measured the consequences of mutations (mistakes in DNA) for humans and other organisms, and he invented models that explain the pattern of DNA differences between individuals

His discoveries made many of today’s genetic technologies possible – including commercial services that use DNA to reveal personal genealogy, the criminal justice system’s application of DNA evidence, and public health models that reveal why some diseases are common and others are rare in human populations. Professor Crow’s work helped establish the University of Wisconsin-Madison as an international leader in genetics.

Professor Crow seamlessly integrated research with outstanding teaching and a passion for public service. One of his greatest gifts was his enthusiasm and ability to clearly explain genetic concepts to a wide range of audiences – he spoke to people he met in the community with the same admiration and excitement with which he greeted his scientific colleagues. The Crow Professorship in Genetics will celebrate and continue Professor Crow’s legacy of discovery and public engagement.